I wrote the first chapter of this story as an enclosure for our 2012 Christmas Card.  Then after Christmas I felt there was more to Elizabeth's story that had to be told.  I put "Carol of the Bells" on repeat and sat down at my computer keyboard.  Here is the song for you to listen to as you read....

Wednesday, May 16:  Our last morning in the Lake District.  We will catch the 11:45 bus to Windermere for the train back to Manchester.  Tomorrow we fly home.  The air this morning in Grasmere is cool and damp.  I hear birds cooing and calling and an occasional 'baaa'. . . . 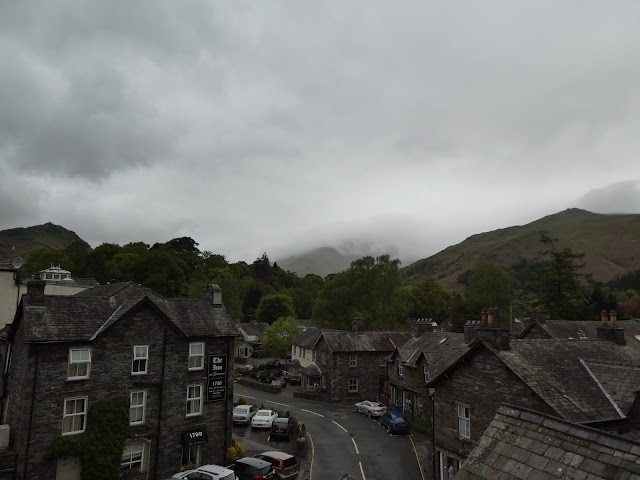 There was a light mist covering Grasmere when we got up Tuesday morning (May 15th).  The view from our rooftop deck at Heidi's Grasmere Lodge was all that I'd hoped for. . . . 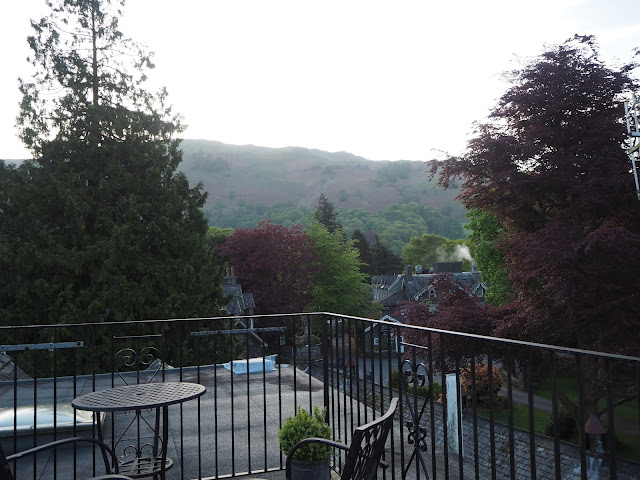 In April 1885 nineteen-year-old Beatrix returned to the Lake District with her family for a short stay in Ambleside with a Mrs. Clark at Laurel Villa, now Lakes Lodge.  She mentions in her journal that she drove up Langdale Valley and "Saw also the attempted revival of linen hand-weaving at St. Martin's College, Elterwater, under the superintendence of old Ruskin...."  I mention this to show the contemporary connections of the people whose homes we visited while in the Lake District.  She goes on to write...

"The mother of Mrs. Clark, of this lodging, had the farm at Rydal, and was very familiar with the Wordsworths, particularly the old lady [Wordsworth's sister].  Wordsworth is always referred to as the poet in these parts, and local tradition says Dorothy Wordsworth was the greater poet of the two.  For some years before her death she was subject to fits of madness, which her brother could generally control.  During these, though a pious and sensible lady, she used to swear like a dragoon.  She had a craze for putting her clothes on the fire, and they at least got a fender up to the ceiling.  She left a great many of Wordsworth's furniture and odds and ends, such as a large clothes horse, to Mrs. Clark's mother."

Besides being mentioned in Beatrix's journal, her connection to William Wordsworth (1770-1850) was through both their desire to preserve the Lake District.  Wordsworth was instrumental in helping to stop the railroad from going any further than Windermere and Beatrix would later work to stop an aeroplane factory from being built at Bowness-on-Windermere where the plan was to use the lake to test hydroplanes.  Grasmere, where Wordsworth would live the last 51 years of his life, would be our base for the next two nights from which to explore the landscape that Wordsworth wrote about.

Even with that to look forward to I awoke Monday morning at 5:30 with mixed feelings about moving on.  I spent the early hours of last morning in Near Sawery basking in what I saw out my window. . . . 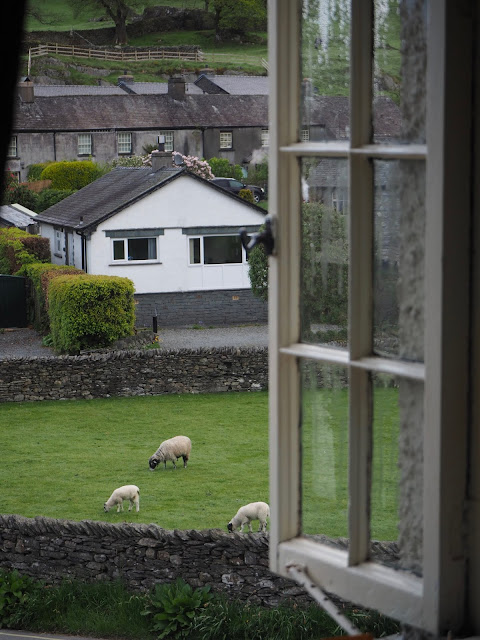 When I left you in my last post we'd just walked the two miles from Hawkshead back to Tower Bank Arms in Near Sawrey.  After freshening up we went down to "our" table for supper.  Tonight they had a lit candle on our table!  Was it because it was Mother's Day or because it was our last night there. . . . 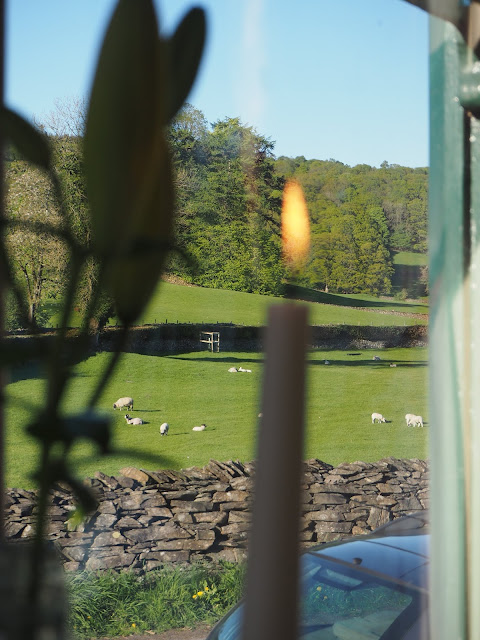 A Day Away - Hawkshead and Ambleside 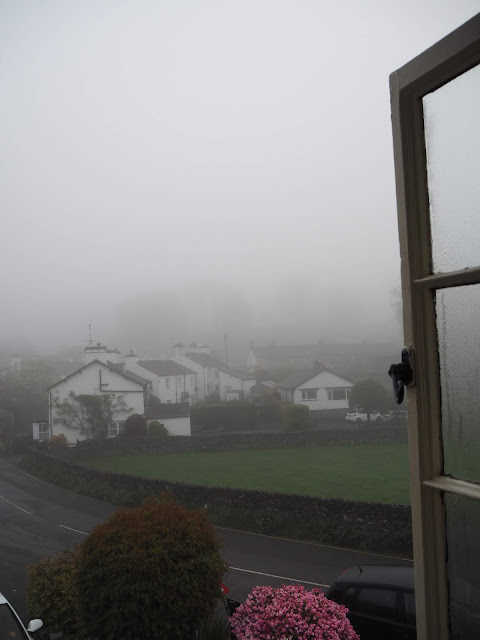 We woke up to gray skies Friday morning--the day of Susan Branch's Picnic. . . . 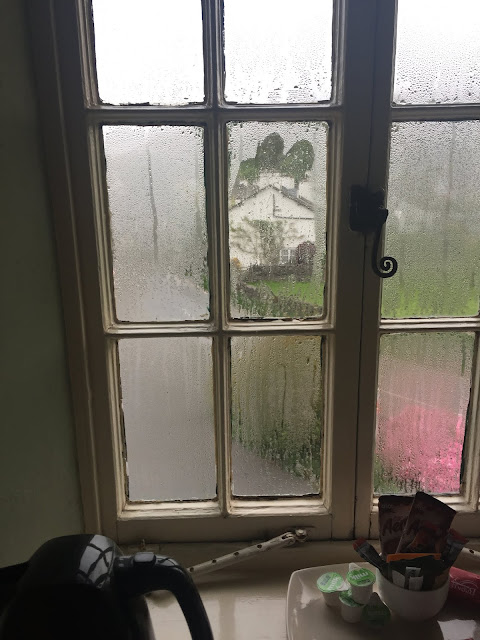 We'd arrived in Near Sawrey late in the morning, toured Beatrix Potter's Hill Top after having lunch at our inn, Tower Bank Arms, and now were eager to head out on our first "ramble."  But first we must get fortified with Cream Tea at Sawrey House Hotel just down the lane. . . . 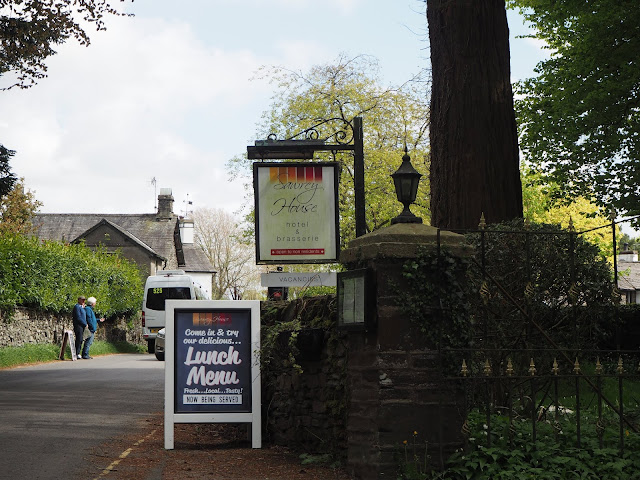 The first sentence in a story is like a gate because it will either draw the reader in or send them away.  I hope to draw you into Beatrix Potter's world just a little bit through this post and future ones about our time in the Lake District.  If you've read anything of Beatrix's life you will know she grew up in London but she grew deeper, more her true self, in the Lake District.

The white gate below was the original entrance to Hill Top Farm--Beatrix Potter's beloved country retreat.   She purchased Hill Top after her fiancée Norman Warne, died suddenly, a month after their engagement in 1905.  The green gate to the right leads to the garden of Tower Bank Arms where we were staying.  We'd just arrived in Near Sawrey earlier that day, Thursday. . . . 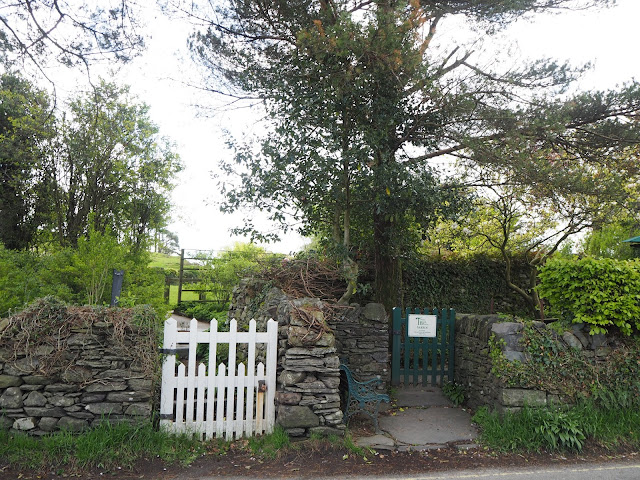 It was just a 7-minute drive in the van/bus from the ferry to Near Sawrey.  We disembarked in front of Tower Bank Arms* where we were staying.  Tower Bank Arms started as an Ale House in the 1600s.  Beatrix Potter featured it in "The Tale of Jemima Puddle-Duck".  . . . 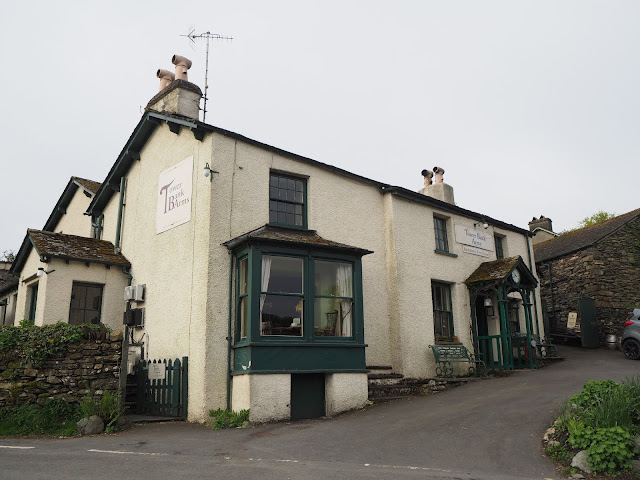 *Just a note:  Photos are not necessarily taken at the time they are inserted into the story.

Morning had broken and look at that sky!  We'd slept soundly and were now enjoying our first cup of coffee in our room overlooking the garden. . . . 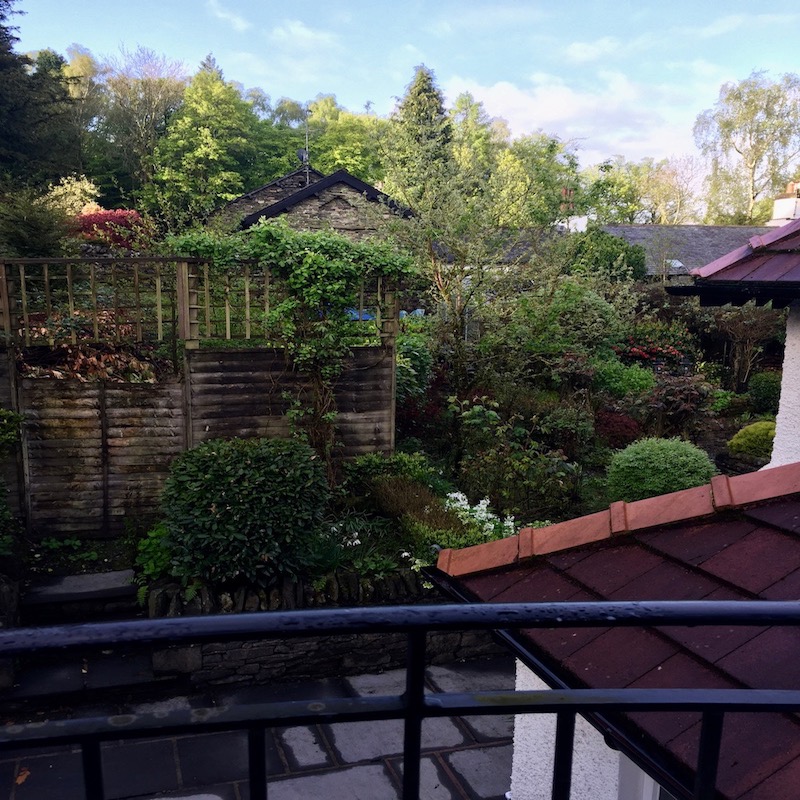 In February 1964, when I was 13 and in love with the Beatles, going to England was what I dreamed of.  I adopted a British accent mingled with my Southern and Mid-western accent, grew my hair long with bangs, straightened it with an iron (yes, a real iron--those were the days before flat irons made just for the hair!), and saw "A Hard Day's Night" at least a half a dozen times.  Fast forward to 2012 when I "followed" Susan Branch to England on Twitter.  She wrote about the trip in her book, "A Fine Romance - Falling in love with the English Countryside," stirring up that long ago desire to go to England.

Then last summer Susan invited us all to attend her Bring-Your-Own Picnic Basket in May 2018 at Castle Cottage, the home of Beatrix Potter in Near Sawrey.  This is just what I needed--two women who have inspired me coming together to spur me on to fulfill that lifelong dream.  My husband and I decided this would be our gift to each other to celebrate our upcoming 50th anniversary in February 2019.  We'd met and fell in love through our love of the music of the Beatles.  It was only fitting we should celebrate immersed in all things British.

We arrived at Heathrow airport in London the morning of the 9th. . . . 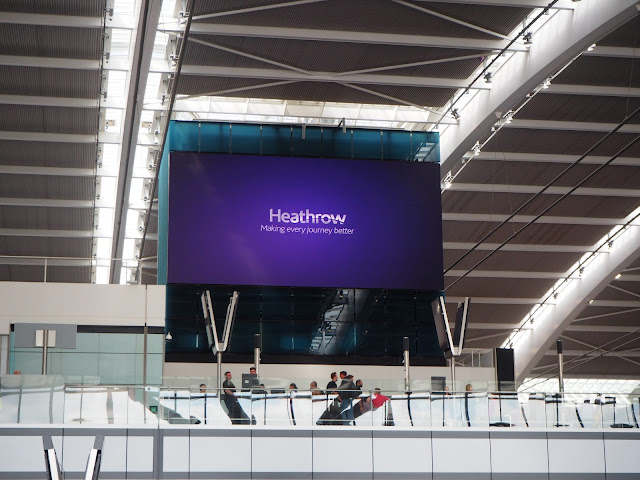 I'd come to England to attend Susan Branch's Bring-Your-Own Picnic Basket event which was to be held on the grounds of Castle Cottage, Beatrix Potter's home from 1913 to 1943.  Ken and I were staying at the Tower Bank Arms just across the way from Castle Cottage.  Here is the view from our window that morning. . . .
Read more »
Posted by Cathy at 9:26 AM 20 comments:

Spring kept its promise.  Here it is!  If you compare the below picture with the one on my last post you will see what I mean. . . . 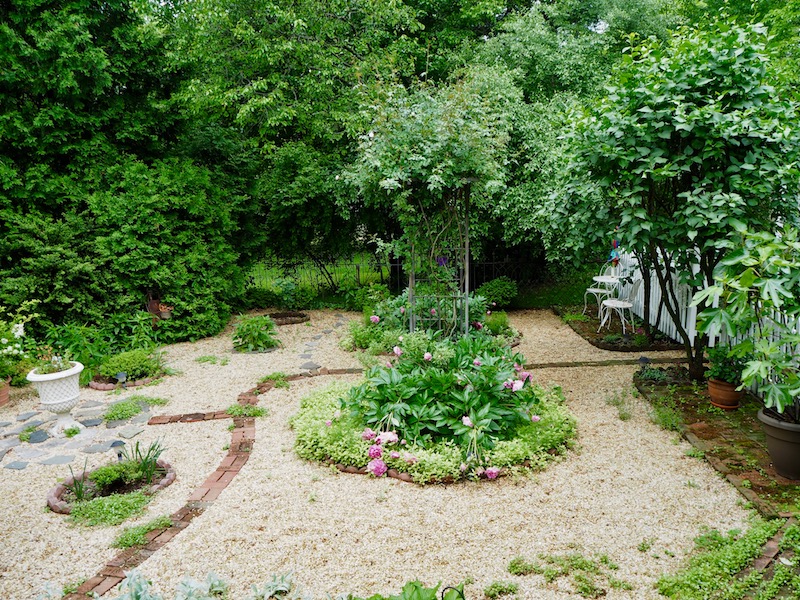 The Promise of Spring

If it weren't for the lovely bird song that fills my garden it would seem pretty dismal right now. . . . 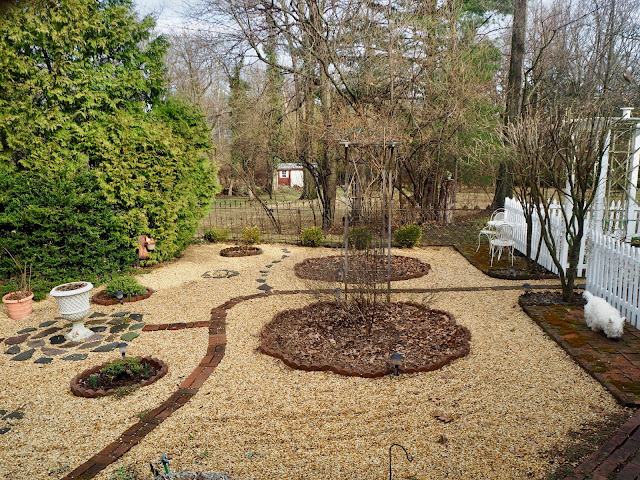 but with a little closer inspection I discovered the promise of Spring!

A New Year A New Blog

As those of you who have been following my web journal for some time know, I spent last year illustrating my story Gabriel's Tale.  Each month I posted my illustrations with snippets from the story.  Now, as promised, I've posted the entire story on Poetry and Gabriel's new web journal:  The Adventures of Poetry & Gabriel. . . . 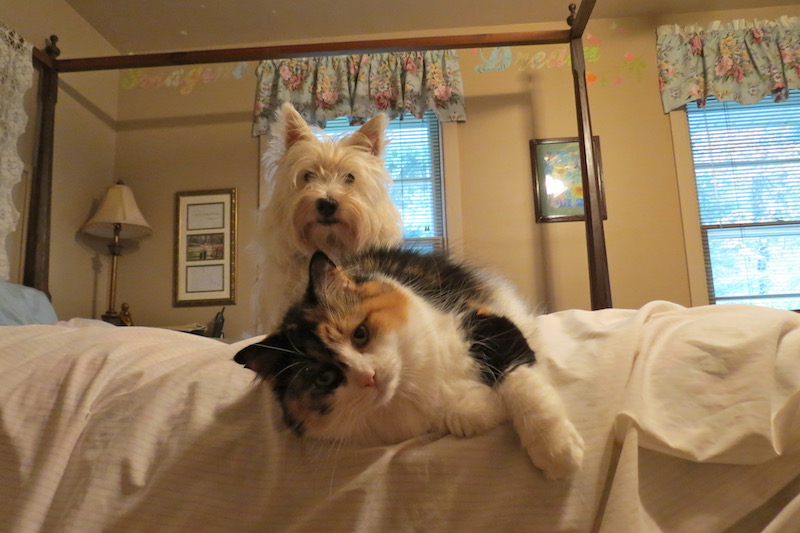