There are a thousand thoughts lying within a man

that he does not know till he takes up a pen to write.

--seen on a tombstone in England

The same could be said about reading a book.  This was brought home to me by a book published in 1932 by Vita Sackville-West.  I was familiar with Vita Sackville-West because Susan Branch visited Sissinghurst in May 2012 and wrote about it in her book "A Fine Romance."  She also blogged about it HERE.  This led me in June that year to read Vita's son's book about his parents, "Portrait of a Marriage," and her grandson's book, "Sissinghurst:  An Unfinished History." 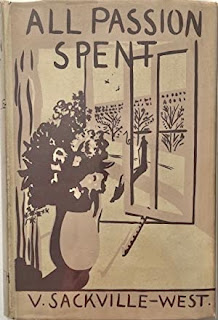 It was only earlier this month that I read one of Vita's novels, "All Passion Spent."  It came to my attention earlier in May through a blurb (I don't remember where now) that used words like "cottage" and "finally lived her dream."  It spoke to me in such a deep way that I went in search of it and was able to find a copy in our State's library system.

It wasn't what I'd expected.  I'd envisioned a thatch-covered cottage in the English countryside and an old woman, now a widow, finally doing things she wanted to do--not what her position as the wife of a Statesman had required.  Instead, it was about an 88-year-old woman, Lady Slane, for whom a cottage meant a brick house on the outskirts of London rather than a mansion in an aristocratic neighbor.  We get to know her through her reminisces.  We see what she valued most and about her unfulfilled longings.  I do not want to tell you anymore in case you want to read it, but I would like to quote Lady Slane.  She had never cared about the wealth she'd enjoyed during her marriage, the jewels, the grand house.  Her children, on the other hand, seemed only to think of their status in society and that required money.  This quote is towards the end of the book...

"And suddenly, in a moment of illumination, she understood why FitzGeorge had tempted her with this fortune; he had tempted her only in order that she should find the strength to reject it.  He had offered her not so much a fortune as a chance to be true to herself."

"He had tempted her only in order that she should find the strength to reject it.  He had offered her....a chance to be true to herself." 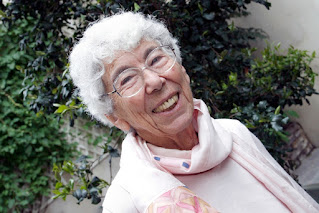 Later in the day I read the obituary for Sigmund Freud's granddaughter, Sophie Freud, who died at age 97.  Her childhood was fraught with discord (due to her parents' relationship) and then Hitler.  She and her family escaped Hitler's attempts to annihilate them (her father's sisters did not escape, however).   In 1988 she wrote about her life in "My Three Mothers and Other Passions" (there is that word again---Passion).  Her family wrote in her death notice, "The act of living a long and successful life was her way to cheat Hitler, who had intended her to perish in Auschwitz."

As a psychologist, she did not hold to many of her grandfather's tenets.   She did not agree with his belief that constant psychoanalysis was the way to help people.  She believed...

"There are so many paths to a person.  All you have to do is unpack another self who has been waiting to be unpacked anyway.  And then go with that self instead of the messed-up self that you've been attached to."

"All you have to do is unpack another self who has been waiting to be unpacked anyway."

The day was not done with me!  I get a daily inspiration quote from Alan Cohen each day.  I had not read the day before's yet, but when I read it I knew why.  It needed to come after reading the others....

"Those who irk you have come by your invitation to help you find peace where you once thought it absent."

"....to help you find peace where you once thought it absent."

Yes, things happen for a reason.  And if you are willing to set your pride aside you will be given the chance to come back to your true self and experience a peace that was there all along.

What all these readings emphasized for me was we are given lots of opportunities to exercise our beliefs.  It's only when we don't that we feel cheated.  We often blame others, but in truth, we secretly blame ourselves for failing ourselves by not standing up for ourselves, or being too lazy to resist, or some such excuse. 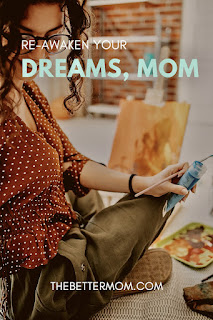 Tricia Goyer asks us to think back to when we were between the ages of 10 and 12.  What did we love doing?  What brought us true joy?

Unfortunately, that doesn't help me much because during that period of my life there was a lot of upheaval in my family which required moving....alot....Survival was my only dream.   Tricia does offer some suggestions, though, for uncovering your hidden dreams.  She says, "Too often we look at what we're NOT, and we forget to focus on who we ARE."  She also encourages us to "nix the lies that hold us back."  We should have no negative talk in our heads about ourselves and our abilities.  Lastly, she reminds us to depend on God.  As our creator, "He will breathe His inspiration into you."

I have experienced this inspiration in the past when I discovered I was able to write stories and draw.  They seemed to come out of nowhere!  Just the fact that I'm able to write this blog post gives me hope that I am coming out of the fog I've been in for several years, even before the pandemic turned all our lives upside down.

I'm determined to discover what passions I've let lie dormant and spend them all before I leave this earth!

What is your passion?  Do you need a kick in the pants to uncover your passion or to get moving on it.  Now is the time!  Let's hold each other accountable.