The Tailor of Gloucester 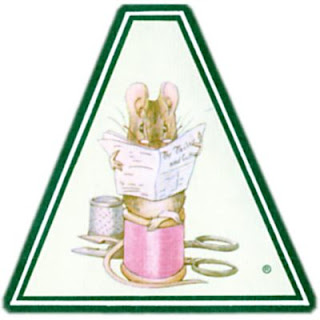 Of all her stories the privately-printed edition of The Tailor of Gloucester is said to be Beatrix Potter's favorite.  After Warne published "The Tale of Peter Rabbit", Beatrix self-published this story believing Warne would not care to publish another story so soon.  She also felt they would want to cut out the many old rhymes she'd included.  She gave Norman a copy for Christmas in 1902.  He immediately wrote back that they would like to publish it.  But as she feared, she was asked to cut much of the book, which included the old rhymes.

The story was inspired by the true story of a tailor in Gloucester told to her by her cousin Caroline Hutton whom she'd visited over the years since 1894 at Harecombe Grange in Gloucestershire.  One Saturday the tailor had left out on the table the cut-out pieces of a waistcoat he was making for the Mayor's wedding suit and came back in on Monday to find it finished except for one button-hole.  A note was attached saying 'No more twist'.  Not knowing who could have done it, he put a sign in his window with the waistcoat that said, 'Come to Prichard where the waistcoats are made at night by the fairies'.

Beatrix had been charmed by the thought of fairies since her childhood summers in Scotland.  She once wrote, 'Everything was romantic in my imagination.  The woods were peopled by the mysterious good folk.  The Lords and Ladies of the last Century walked with me along the overgrown paths in the garden'.  She decided she must write the story about the tailor's strange happening.  She changed the time period to the 18th century and the fairies to mice.  The story was finished by Christmas 1901 with 12 watercolor illustrations and given to Freda Moore, her former governess's daughter.  Her dedication read:  My Dear Freda, Because you are fond of fairy-tales, and have been ill, I have made you a story all for yourself—a new one that nobody has read before.  And the queerest thing about it is—that I heard it in Gloucestershire, and that it is true—at least about the tailor, the waistcoat, and the 'No more twist!'

After the success of the Warne-published Peter Rabbit, Beatrix borrowed back the hand-written copy she'd given Freda, rewrote it, added more illustrations, and had 500 copies printed privately.  One of the poems that she remarked was cut from Warne's publication was this one:


Beatrix was given private access to the South Kensington Museum's (now Victoria & Albert) collection of 18th-century clothing which she used as her model for the clothing.  You can can see the  waistcoat HERE.

Warne published the story in October 1903.  It can be read HERE.  Or you can watch the animated version below.  The beginning is a delightful live-action scene in London. . . .

Thank you ALL for following and commenting on my Year with Beatrix Potter & Friends.  You were such an encouragement to me--knowing someone was out there taking the time to follow my drawing/painting efforts and then leave a comment to let me know.  It helped a great deal in keeping my feet to the fire--and my pencil/brush to the page!  Anyone who commented six or more times has been entered in my GIVE-AWAY--one entry for each month they commented.  Regrettably, after checking postal costs, I cannot include my International commenters.  The winner will receive my extra copy of Beatrix Potter's Journal.  Not only does this large-format book contain beautifully illustrated tidbits on Beatrix's stories, it contains a facsimile of her privately-printed, "The Tale of Peter Rabbit". . . .

The name that Jemima drew out of the bowl is:

Martha Ellen, I already have your address so you do not need to send it to me, but I will wait to hear from you in case you already have a copy and do not wish to have another.  If so, I will draw a new name.

I thought it fitting to conclude my series on Beatrix Potter with this poem that she wrote.  It was found amongst her papers after her death on December 22, 1943:


I will go back to the hills again
That are sisters to the sea,
The bare hills, the brown hills
That stand eternally,
And their strength shall be my strength
And their joy my joy shall be.

There are no hills like the Wasdale hills
When spring comes up the dale,
Nor any woods like the larch woods,
Where the primroses blow pale,
And the shadows flicker quiet-wise
On the stark ridge of Black Sail.

I will go back to the hills again
When the day's work is done,
And set my hands against the rocks
Warm with an April sun,
And see the night creep down the fells
And the stars climb one my one. 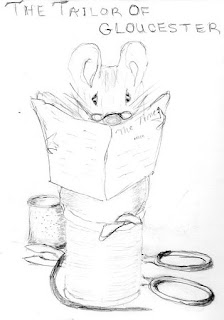 Note:  Much of my information was taken from Leslie Linder's 1971 "A History of the Writings of Beatrix Potter".  It is a comprehensive collection of published and unpublished works by Beatrix Potter.  I highly recommend it.